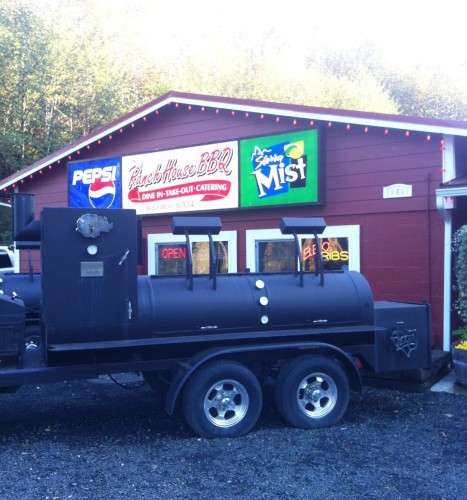 My brother Jeff’s birthday was this past weekend, and he had one request: Good barbeque. To be honest, I haven’t had any local BBQ I’ve been wowed over, until now.

I come from a family of food lovers, and we all have our own opinions when it comes to choosing a restaurant for a family dinner. Doing as brothers do, Jeff reminded me I don’t know everything about everything, even restaurants, and he did a little research on his own, finding Ranch House BBQ and Steakhouse in Olympia. I took to Twitter and asked folks what they thought. From the unanimously positive responses I received, it seemed like a good idea to check out what people were calling the best BBQ in the South Puget Sound.

The drive to Ranch House is scenic, and while it is a bit out of town, it’s worth the drive down the tree-lined highway. Just when we thought we were lost or must have passed the restaurant, we spotted it on the side of the road, right alongside Kennedy Creek. The giant smokers outside were a good sign.

When we stepped through the doors, the first thing I noticed were the walls lined with awards. There are trophies on the window, banners and plaques everywhere you look. 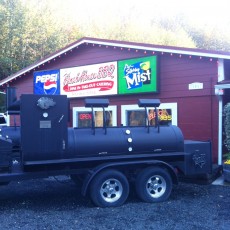 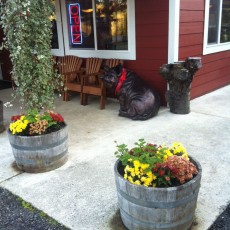 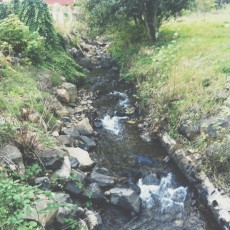 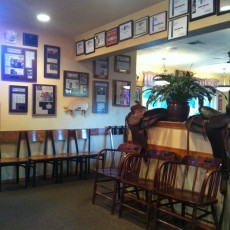 I tried a little of everything off the menu: Smoked chicken, brisket, pork ribs, hot link, pulled pork, baked beans and coleslaw. My favorite was the brisket, which is smoked 18 hours until it is falling apart and has developed a nice bark on the outside. The beans were perfectly sweet and zingy, and the smoked chicken juicy with a prominent smoke flavor. None of the meats really needed a barbeque sauce, but theirs is balanced and definitely worth trying. You can even take a jar home with you.

My husband Casey is becoming quite the food critic in his own right. He’s accompanied me to pretty much every restaurant I’ve written about, all the events I go to and even watches food TV. He’s wanted to write a post for a while, and since this was a family affair, I asked him to weigh in on Ranch House BBQ. Here’s what he thought:

“Nestled away in the woods of Olympia is Ranch House BBQ.  Founder and Pitmaster Amy Anderson proves to be one of the best when it comes to authentic BBQ.  Anderson has been featured on Food Network TV shows such as “Grill Girls” and “BBQ Country Cook-off” showing off her BBQ prowess. Even more impressive are the countless championships and world titles she has received.

There are an array of menu options to choose from. I would recommend the Flinstone-esque pork ribs. Smoked over cherry wood for great flavor, the meat falls off the bone and melts in your mouth ($15.99 half rack/$20.99 full). I’d also order the brisket again, but this time as a brisket sandwich ($9.50). The plate is piled high with skin-on fries, and you can also get baked beans, coleslaw or potato salad.

Being indecisive, you could do what I did, since I felt I couldn’t pick just one thing on the menu. I opted for the Super BBQ Sampler ($24.50), which comes with a quarter smoked chicken, beef brisket, pulled pork, hot sausage link and rib tips.  It was a nice way to taste all the different meats they offered, and was a large enough portion to easily share.

Whether you are looking for great BBQ or want to take a beautiful drive on a nice fall day, I highly recommend you stop into Ranch House BBQ.” 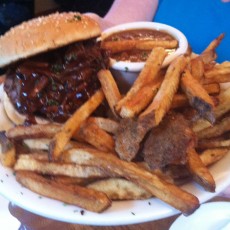 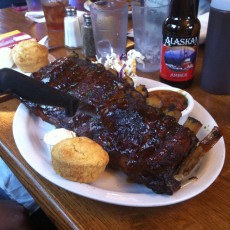 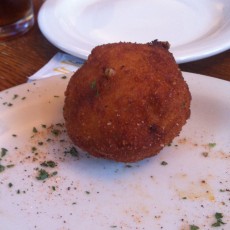 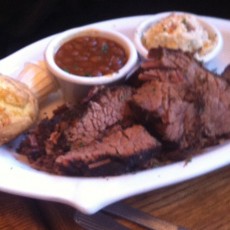 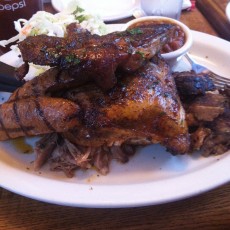 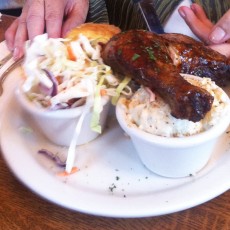 So there you have it. Not only did Casey love it, but my brother really enjoyed himself on his birthday, and that’s what it’s all about.

Bonus: Ranch House caters with their super neat BBQ trailers for parties over 50.