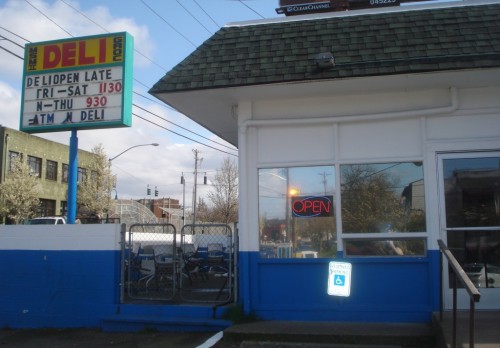 Looking for a great deal and a satisfying lunch in Tacoma?

Look no further than MSM Deli (or Magical Sandwich Makers — yes, that’s really what it stands for).

Don’t be afraid of the sketchy mini mart exterior.  Sure, you can get your cigarettes and beer there.  But that’s just the beginning.

Craving a good sandwich for lunch, I dragged my brother along with me to explore.  “There’s cops eating here.  You know it’s good,” was his observation.

Before going in, i asked one of those cops, “So is this place good?”  “Best sandwich in Tacoma” was his reply.  We’ll just see.

I decided on the meatball sandwich.

It was LOADED with meatballs.  And I’m not kidding, as you can see.  And they were damn good meatballs — nice and tender, well seasoned.  And it had provolone.  You can’t go wrong with that.  I ate it all.  And I would order it again.

For my brother, the club.

A typical club.  But it had sprouts.  Can’t get enough of those.  And BACON.  And AVOCADO.  Okay, so it rocks.

For my dad who we were bringing lunch, Mike’s Deluxe.

Okay, this sandwich was HUGE.  I mean, the other two were big.  But this one, huge.  And it’s loaded with good stuff.  Definitely enough to feed two people.

These prices beat any old chain (Subway, Quiznos) in quality, for sure.  And in some ways, price.  I boycott Subway and Quiznos because they don’t have avocado and that’s practically sandwich sacrilege, in my opinion.