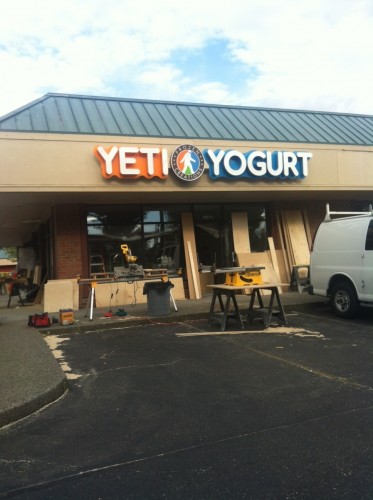 Since Coldstone Creamery closed, I’ve had my eye on the now-vacant space next to Round Table Pizza in Westgate for a while. I’ve hoped it would turn into a little neighborhood deli or cafe…or something…anything,  except perhaps a frozen yogurt shop. Lo and behold today I see signs go up for Yeti Yogurt, a Pacific Northwest chain with four current locations and six more locations slated to open in the coming months.

I don’t hate frozen yogurt. In fact, I like it very much. Your choice of flavor and toppings, with less calories than ice cream…all good things. But there is a Gibson’s Frozen Yogurt kitty corner to this location. Aren’t two frozen yogurt shops in one block a little much? Not to mention, the countless frozen yogurt shops popping up all over Tacoma and the South Puget Sound and the soon-to-be Gibson’s Frozen Yogurt Truck coming next month (see my article in the Weekly Volcano on that here).

Too much of a good thing? Maybe. Either way, Yeti Yogurt in Westgate is slated to open this summer, as is another location in Fircrest. There’s a location at 176th and Meridian in Puyallup that’s already open. 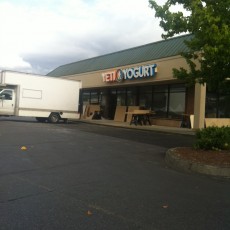 4 thoughts on “SPOTTED: Yet Another Frozen Yogurt Shop”