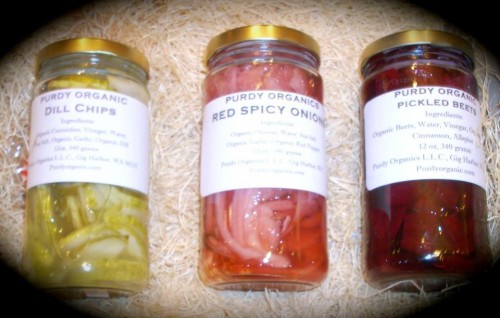 You may have seen the ladies of Purdy Organics at your local farmer’s market. With tasty pickles, pickled beets, carrots, peppers, onions and more. I’m a big fan of all of their products, and would love to see them in more stores!

With only a few days to go, the Purdy Organics Kickstarter ends on March 23rd. Check out their video on their Kickstarter page. Support them if you can, and help take their business to the next level!

Ask any Tacoman where to get the best soup in town, and the answer is unanimous: Infinite Soups. I am a huge fan of their soups, and even included them on the Tacoma Cheap Eats Evening Magazine segment I was a part of. With their fresh menu of soups that changes daily, it’s a can’t miss Tacoma food destination.

Infinite Soups’ current location at 445 Tacoma Avenue South is…small. It’s so small, it can be hard for people to find. While it’s worth hunting for, Infinite Soups’ Kickstarter campaign is to raise $5,300 to move them to a larger location in the Old Post Office downtown Tacoma. Yes, you read that right. The 72,000 square foot former post office is potentially turning into a collection of retail, commercial businesses, restaurants, event space, art studios and more. While that’s exciting enough in itself, having Infinite Soups in this soon-to-be cool, bustling hub of activity would be fantastic. More soup for all!

Check out both Kickstarter campaigns and help out two local small businesses!